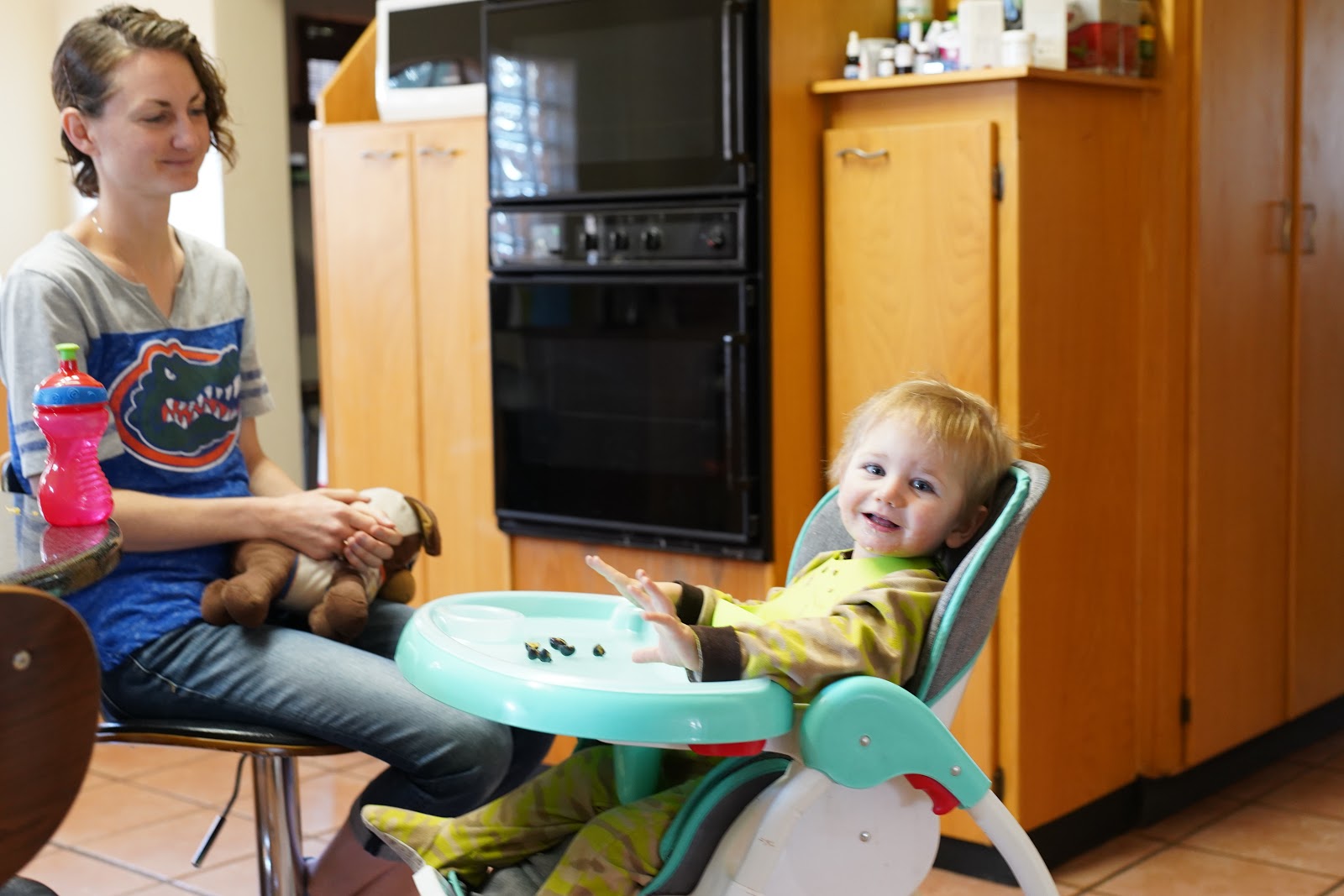 Sydney is Emmit’s Mom, manages the SRF Webinars and SRF is lucky to have her as a Special Projects Volunteer.

Our son Emmitt is three and was diagnosed with a mutation on his SYNGAP1 gene at eighteen months old. His seizures were diagnosed at sixteen months and we began what I can only describe as a rollercoaster of trying to manage his severe epilepsy, while still providing him the best quality of life possible. Eating has been one aspect of life where we have seen some really high highs and some really low lows. At his best, Emmitt asks to eat, thoroughly enjoys eating a variety of foods, and gains weight like a champ. At his worst, we’ve had to force feed him and syringe him water for months at a time. On this ride, I’ve noticed several factors that I feel have most affected his feeding and may be of help to others.  I’ve decided to share them here. If you’re reading this and are on the other side of the spectrum with a child who overeats regularly, please consider sharing your experience with us through a blog of your own!

You may already be aware that children with SynGAP have a unique trigger for some of their seizures: chewing! In fact, in this 2019 paper, 25% of the participants had seizures triggered by eating. In the early days of Emmitt’s epilepsy, seizures were solely visible while he was sitting and eating in his high chair (see video https://youtu.be/2FAG67JrmTY) Emmitt got to the point that sometimes touching food or thinking about putting food in his mouth would trigger an eye flutter and even head nods. While seizures during feeding seem to have become his new normal, they certainly are unpleasant for him and prolong the time it takes for him to eat. At his worst, Emmitt would seize with every bite and sometimes hit his head on the table.

Sitting in front of Emmitt during a meal so that I can see his face to count seizures.

These days we are on five -yes five! - antiepileptic drugs. As one increases the number of medications, the likelihood of unhappy side-effects also increases. I was only truly able to identify effects on Emmitt’s appetite because I kept records of eating and drinking, and insisted on regular blood work. Because we are still titrating new medications, we still go for monthly blood draws to monitor liver enzyme levels which are famous for getting out of whack due to certain seizure medications (a side effect of elevated liver enzymes is loss of appetite.).  In one particularly drawn out season, Emmitt’s liver enzymes were so elevated after adding Epidiolex to Valproic Acid and Clobazam that he refused to eat and drink for three months until we reduced the two latter medications to acceptable levels. The waters can get very murky in the land of multiple medications and your neurologist and a gastroenterologist can help you monitor medication and liver enzyme levels when needed.

The paper mentioned above also found that 30% of participants had chewing and swallowing difficulties. At a year of age, Emmitt subsisted mostly on breast milk and the occasional bit of yogurt or baby puree. This is around the age that babies typically are decreasing their breast milk or formula intake and getting more serious about table foods that the rest of the family eats. We enlisted the help of a speech therapist with expertise in managing feeding challenges and worked at giving Emmitt facial massages and other exercises she gave us as well as encouraging him to put soft foods in his mouth. Over several months, he did improve to eventually be able to eat most foods with the family. However, later speech therapists ended up referring us to have a swallow study done to make sure that Emmitt was not silently aspirating on any of his food or water. In some cases, our children with SynGAP do have abnormal findings on these studies which can be in part due to hypotonia. A team for addressing the oral mechanics of chewing and swallowing is typically comprised of a speech and/or feeding therapist, an occupational therapist, a neurologist, and an ear, nose, and throat (ENT) doctor.

Constipation, reflux and illness have each negatively impacted Emmitt’s feeding at one point or another. Unlike my older children who get ill and usually begin eating again within a couple days, illness for Emmitt can mean weeks of poor eating and drinking. Emmitt struggles with constant constipation which means that he can sometimes go days without stooling and get uncomfortably bloated. This back-up contributes to reflux which also makes him reluctant to eat.

We flunked out of the keto diet after four months. I have several theories about why it wasn’t successful for Emmitt, but they center around social/emotional reasons. For one, Emmitt was enjoying food at the time he started keto, so suddenly having to withhold some of his favorite foods that were too high in carbs, like watermelon, was frustrating for him. Then insisting on him eating lots of fats meant needing to spoon feed him many foods covered in high fat sauces instead of using his hands to feed himself as he was used to doing. Furthermore, we were going through an international move at the time, so I didn’t have the energy to completely revamp the entire family’s diet. This meant he watched his older brothers eat foods he was not allowed to have and was instead given food he didn’t prefer. I can only imagine that other children with SynGAP experience similar frustrations related to the social dynamics of food. This is, of course, exacerbated by the inability to easily communicate these frustrations with caretakers.

Trying to power through a keto breakfast with the help of Youtube videos on my phone.

Our kids exhibit sensitivities to all kinds of things in their environments that we, as caretakers, may take for granted. Many parents have vouched for the effectiveness of having a distraction during eating such as a book, or bubbles, or their iPad. When I’ve ruled out all of the above possibilities for poor eating, I’m inclined to think that I need to let Emmitt be my guide because there is so much going on in his brain that I don’t understand. I try to take note of textures, food items, the environment, his sleep the night prior, and even my mood to understand what may be contributing to poor eating. During our three month stint of poor eating earlier this year, our feeding therapist had him touch all kinds of foods and play in them for fun. He was very averse to this. However, once we corrected his seizure medications and his appetite returned, we found he was much more willing to touch foods and didn’t find the sight of them noxious anymore. One parent has mentioned to me that their child repeatedly, frequently swallowed so much excess air that her abdomen became painfully distended and caused loss of appetite. It’s another example of the confounding ways our children can experience the world when their brain is not functioning properly, even when it comes to something as necessary as eating.

The last six months have been kinder to us as far as eating goes. We don’t skip meals anymore and I don’t wake up in the middle of the night with anxiety about having to feed him. But we are still very much on the rollercoaster. Emmitt has just started a brand new medication, Fintepla, which was previously used as a weight loss drug. I’m putting our past experience to use trying to mitigate side-effects as we continue to titrate up and pray for better seizure control. We ultimately ended up placing a feeding tube in August of 2020 to help Emmitt by augmenting his water intake and to give us peace of mind for the challenges we know we will continue to face regarding eating. It was a tough decision but one that has benefited all of us significantly. While I ultimately hope Emmitt will not always need it, it is comforting to know we can prevent him from facing dehydration and malnutrition when feeding challenges pop up in the future.

I Planned A Simple Garage Sale And Failed - In The Best Way!

The Benefits of Ciitizen: One Mom’s Story