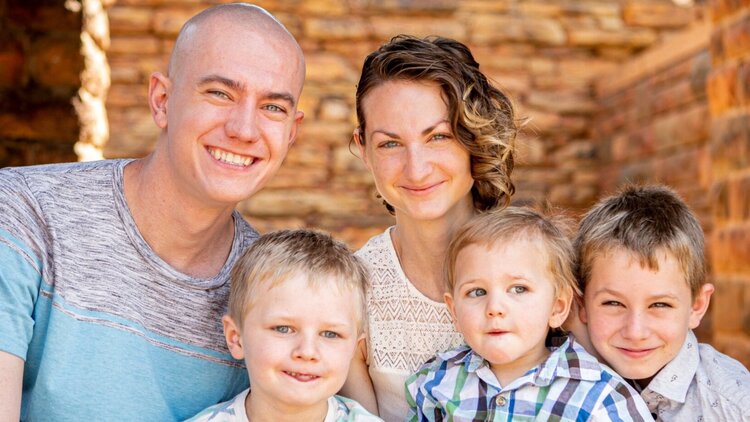 Editor’s note: I felt very alone when Tony was diagnosed with Syngap.  There were so many questions and so few people to talk to, I thought.  And I live in California next to Stanford.  I cannot even imagine if I had been diagnosed while working in Africa.  I remember when I updated the #SyngapCensus to include one case in South Africa—first case in Africa.  I reached out & found an American family working as missionaries.  I said, let us know what you need.  The next thing I knew, they were raising funds online to come to the US and do testing since their son’s seizures were getting quite severe.  I remember a late night call where I said, “I’m sorry to say this, but you can’t raise enough money to cover what lies ahead if you are paying privately; you may need to come home and get on US insurance… this is going to be a long road.”  As you can read below, they came home.  It’s Africa's loss and America’s gain.  This family is remarkable and our community is lucky to have them; Emmitt chose his parents well. -Mike

Our third child was eight months old when I started noticing his eyes having unusual flutters while changing his diapers. I talked myself out of the idea that these tiny twitches were something to be concerned about. Emmitt had some previous concerns about autism and developmental delay, so we already had a neurologist at a private hospital in Pretoria, South Africa where we were living. Suspicious, I arranged an EEG and, much to my relief, no abnormal activity was found. Then one summer afternoon my sweet boy, chubby and full of smiles, had another eye flutter and his body went completely limp and fell to the ground.

What was once only visible to me quickly became evident to everyone else in our home. During meals, Emmitt’s eyes and face would twitch with nearly every bite. While we were waiting for a follow-up EEG he fell out of a chair while seizing and cut his eye. Within a matter of weeks, the nearly unnoticeable flutters became almost non-stop throughout the day.

The next EEG revealed that he did indeed have epileptic activity and we started our very first medication, valproic acid. The flutters all but disappeared and I no longer feared him falling over without warning. I counted us among the lucky ones, having read that only some people with epilepsy get this kind of control with a single drug. Sadly, that’s not where Emmitt’s journey toward seizure control ended.

The journey soon became a race to outpace Emmitt’s worsening seizures, and we still have not reached the finish line. Six weeks later the flutters returned as if they had never gone away. More valproic acid, then some Lamotrigine, always watching for the infamous rash. Somewhere early on—via the Invitae Epilepsy Panel—the race got an official name: Syngap1, likely the first diagnosis on the African continent. Emmitt was 18 months old, it was May 2019.  Repeat EEGs of fifteen minutes while sedated masked the true nature of what was going on in his brain. Slowly, the Lamotrigine went up and the seizures never went down. It was normal to count twenty to thirty eye flutters during his breakfast alone.

As I grew in my knowledge about epilepsy and began connecting with other Syngap families, I realized that Emmitt’s epilepsy was heading towards the severe end of the spectrum. I began pushing our neurologist for better follow-up and quicker responses. Even at a private hospital, there was no nurse practitioner staff to back up our neurologist by answering questions or making day-to-day adjustments to medications. I had to press for every single lab level that we ever got, guided by Dr. Google and fellow parents. Even in big South African cities, the need is so great and the number of professionals so small that this is regarded as normal. Calls to find other neurologists put us on waiting lists of six months to a year. One neurologist told me that we could not be seen because we our case needed too much follow-up.

A few months on, Emmitt’s seizures weren’t any better and I began to notice patchy red rashes showing up on his face. This led to the recommendation of a hasty withdrawal from Lamotrigine, replaced with Clobazam. As the number of myoclonia doubled, head drops also began to reappear. The head drops became so severe that we had to buy a soft rug for our wood floors so that we could safely set him down. This in turn led to the introduction of Keppra, and Keppra rage. Throughout all of this we never once saw his neurologist, even when I expressed panic that Emmitt’s seizures were numbering in the hundreds most days.

No longer able to bear it, we arranged for an at-home EEG and the data was horrific. Drops every five to eight seconds. By that point, Emmitt had also developed a fever and we could tell something had been brewing in his lungs. Turns out the rash our neurologist never saw wasn’t from the medications after all. He was sick. As soon as the EEG was done, a friend and I packed a few things and headed for Johannesburg to find another neurologist through the emergency room. By that point I had been in touch with Mike Graglia & his wife Ashley Evans, the founders of the Syngap Research Fund.

When I was messaging Mike he was at a Precision Medicine Epilepsy Conference with some of the best Neurologists in the US.  As he tells it, he ran over to a member of the SRF Scientific Advisory Board and asked who we should see.  Emails flew and an hour later I was was directed  towards a pediatric neurologist at Sunninghill Hospital.  We spent nine days at that hospital titrating medications.

We left Johannesburg in better shape than when we had arrived, bringing the drops down to about twenty per day. The doctors at the hospital told us that at home in America we would have access to newer drugs and technology for treating Emmitt’s severe epilepsy. In a whirlwind three weeks we packed up our entire lives (again) and Emmitt and I returned ahead of my husband and older two boys, hoping that we would be able to get settled before any further emergencies arose.

It was October 2019, Emmitt was about to turn 2, and I flew half way around the planet to bring him home, just praying for no serious seizures until we arrived.  We avoided other children and public places until our American health insurance kicked in a few weeks later. At that point Emmitt was using Depakote, Onfi, a small dose of Lamotrigine, and the Modified Atkins diet to keep his seizures in check.

Half a year after our move home, we still haven’t achieved the elusive goal of “seizure control”, though we are making some progress. Now taking Depakote, Onfi, and Epidiolex, Emmitt is not having drops every day but does still have frequent eye myoclonia. Unfortunately, these medications also still need adjusting as the side-effects, including poor eating and drinking and lethargy, have made daily life really challenging. We go for frequent lab work to ensure his liver is ok with all these medications; have numerous EEGs and endless appointments as we work to see Emmitt thrive.

Along the way, we were grateful to meet other Syngap families from around the world online. Organizations like Syngap Research Fund are a source of scientific knowledge and parenting wisdom for families like mine who have come to the unexpected realization that are parenting a child with a rare disorder. We are appreciative that the challenges of being in a foreign country during Emmitt’s Syngap and epilepsy diagnoses were met with a community full of resilience, armed with knowledge, and brimming with hope as we advocate for effective treatments for Syngap.

Update, see the video Sydney & Brett did about their first year with a SynGAP Diagnosis: