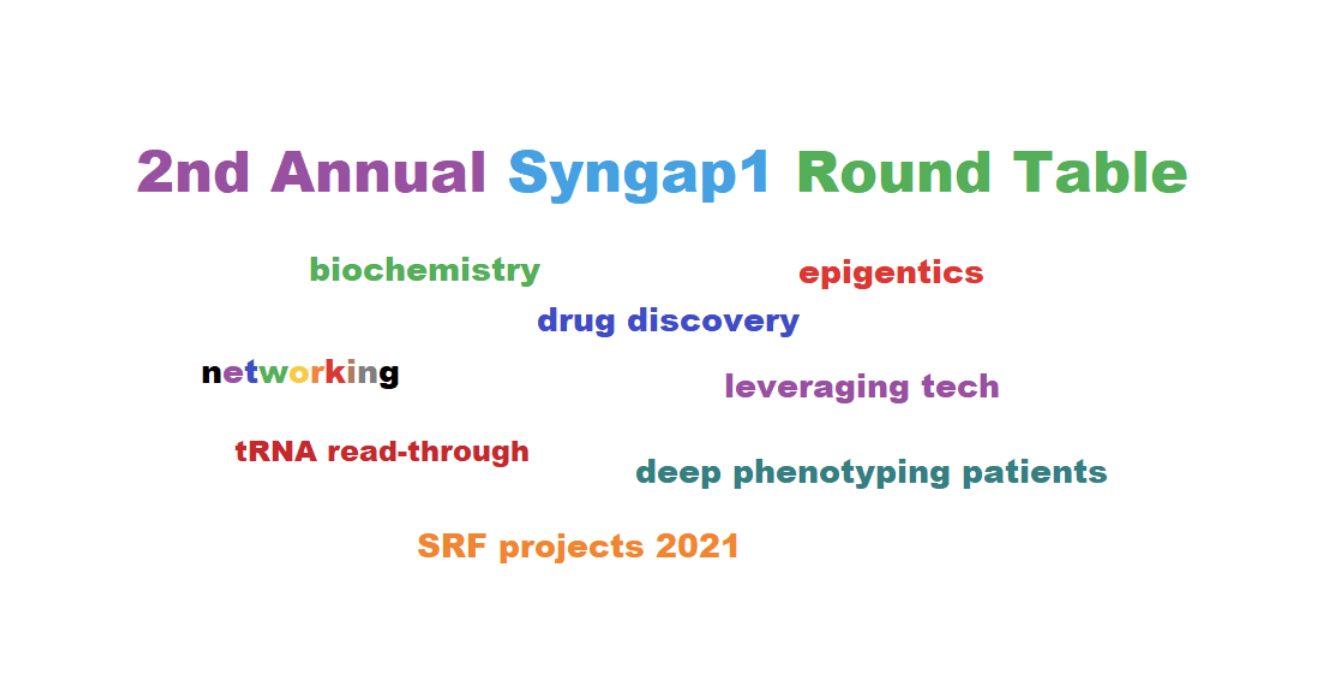 JR is a parent of a Syngapian, a geneticist, and a volunteer with SRF.  The first roundtable was last year in Baltimore read about it at Syngap.Fund/RT1, and next year we will be in Chicago on Friday, December 3rd, 2021, register at Syngap.Fund/RT3.

The second annual Syngap1 Round Table featured a veritable force of head PIs and clinicians at the forefront of Syngap1 research.  Researchers and families alike were impressed by the progress being made toward understanding the Syngap1 gene and protein, and developing treatments and cures.  The eight half-hour presentations, live with Q&A, had nearly no overlap, highlighting the varied and comprehensive approaches used to study Syngap1.  The talks covered biochemistry, epigenetics, drug discovery, protein networking, development of tRNA treatment, deep clinical description of patients, and the development of an AI-aided digital Natural History.  The final talk was a look at SRF projects coming in 2021, and the heroic efforts to get ICD-10 and ICD-11 codes to specifically describe Syngap1 patients.

Mike Graglia, co-founder and co-managing director of Syngap Research Fund, welcomed everyone and handed it over to the emcee, Dr. Heather Mefford, SRF Scientific Advisory Board member & Epilepsy Geneticist extraordinaire at University of Washington.

MARY KENNEDY OF CALTECH, BIOCHEMIST AND SYNAPSE PLASTICITY RESEARCHER, ONE OF TWO DISCOVERIES OF THE SYNGAP PROTEIN.

Dr. Kennedy is a biochemist who studies a wide variety of proteins involved in synaptic plasticity.  She gave a great talk about specific functions of the Syngap1 protein.

Syngap1 protein is found in great abundance in the Post Synaptic Density (PSD), a subcellular structure in neurons, where signals are received from other neurons.  The PDZ domain at the far end of Syngap1 protein interacts directly with the also-abundant PSD-95 protein, localizing Syngap1 within the surface layer of the PSD.

Phase separation is a very cool and other-worldly phenomenon.  It is the creation of a liquid-liquid interface (like oil:water not mixing), helping to organize the PSD within the neuron. Understanding phase separation will help elucidate facets of protein interactions and movements within the PSD.

Comparing the amino acid sequences of 132 different mammalian versions of Syngap1 shows an unusually high level of sequence conservation.  One interpretation is that Syngap1 protein interacts with other proteins and itself along the entire length of the protein.

Dr. Kennedy shared her idea that Syngap1 acts as a dial to fine-tune the amount of AMPA-R at the membrane, by changing the levels of exocytosis and endocytosis.  She pointed out that this idea is different from an interpretation favored by Dr. Huganir’s lab.  When we hear that two scientists have differing interpretations we are excited, as it can lead to new experiments and important insights.  We are lucky that Syngap1 biology is being studied in multiple labs with different specialties, and we look forward to more insights from Dr. Kennedy and her lab.

Dr. Heller is an epigeneticist who pioneered methods to study the epigenetic regulation of disease genes. Her career has focused on diseases of addiction and depression, and her lab is now also researching Syngap1.  Dr. Heller has a personal connection to the Syngap1 community through her niece Ruby, and will receive SRF funding for a postdoctoral fellow starting in 2021. #SRFHeller

A decrease in Syngap1 expression is what causes the Syngap1 neurodevelopmental disorder.  Dr. Heller studies increases and decreases in gene expression due to epigenetic changes, and so will use that approach to look for places to increase Syngap1 expression as a way to treat the disease.

By examining published data sets for both human and mouse genomes, Dr. Heller can find targets to increase Syngap1 expression.  By deep sequencing mouse brains she can find which Syngap1 isoforms (natural complexity of the gene) are present in which cell types, look at splice machinery available in different cell subtypes, and look at gene expression after drug treatment.

Dr. Heller’s studies will provide foundational pieces of information about our gene.  We are lucky that she is studying Syngap1.

Dr. Rumbaugh has intensively studied Syngap1 over his long career.  From a cellular perspective Syngap1 has two major biological functions: one in synapse function, and another in cellular morphogenesis (position and shape) .  In Syngap1 Syndrome, both these functions are altered, changing how postsynaptic dendrites mature and also how neural circuits work.  As a result patients have many symptoms, including changes in sensory processing and behaviors.

Dr. Rumbaugh developed a high-throughput screen to find drugs that upregulate Syngap1 expression.  We are lucky that he has a position at Scripps in Jupiter, Florida, home of one of the biggest drug libraries in existence.  While no drugs which directly upregulate Syngap1 expression have been found (to date), several drugs down-regulate expression.  By following these leads, biological pathways can be found that might be modified by a drug, in order to increase the steady-state levels of Syngap1 protein.  SRF is supporting some of Dr. Rumbaugh’s work with a full time three year postdoctoral fellow.  #SRFRumbaugh Some of their work includes the development and sharing of a test to measure the level of Syngap1 protein.  This assay will be useful to researchers working to increase the expression levels of Syngap1, which is the goal of all the therapeutics currently in development by various research and corporate groups.

Dr. Coba uses mass spectrometry to find the complete set of proteins that interact directly with another protein.  For Syngap1, he has made beautiful and detailed networking diagrams illustrating which proteins are found directly with Syngap1.  The list is long, and in fact Syngap1 is a hub of sorts.  By studying these interactions over different times in development, and in different cell types, he will draw a more complete picture of all the potential direct roles of Syngap1 within a developing organism.

If that isn’t enough complexity, Dr. Coba studies the exact mutations of patients by collecting blood samples, makes neurons in tissue culture (from iPSCs aka induced pluripotent stem cells), and looks at the effects of genetic background and pathogenic variants on the phenotype.  In addition, Dr. Coba currently uses an advanced machine in his lab purchased with a grant from SRF, and will be getting SRF funding for a post-doctoral fellow in 2021. #SRFCoba

﻿Drs. George and Ahern have teamed up to create a treatment that will be useful for many different diseases.  They leverage basic biology to create a tool that will “read through” a premature stop within a protein.  Who does this help?  In fact, many of the Syngap1 pathogenic variants (and pathogenic variants for many diseases) are caused by single-base changes in the DNA that result in premature termination of the protein.  The changes that will be targeted by their treatment are called nonsense variants because they do not code for an amino acid at that point, but encode a “stop”  instead so that the protein-making machinery stops before synthesizing the complete protein.

Dr. George gives a great overview of the basic biology behind the tRNA read-through concept.  Dr. Ahern discusses how a treatment might get delivered with an Adeno-Associated Virus (AAV), and importantly shows that the treatment does not have off-target effects.  Dr. Ahern describes the next steps in developing a clinical treatment, including making mouse models with protein-truncating variants to test.

The initial results showing no off-target effects are stunning, are applicable to many genes and many patients.

Dr. Smith-Hicks is one of only a handful of neurologists world-wide who have seen more than a few Syngap1 patients.  She gives a wonderfully comprehensive description of the clinical features of Syngap1 Syndrome, complete with pertinent literature citations.  Next Dr. Smith-Hicks reports her deep phenotyping of patients, research done in her clinic. Importantly, she brings previously unreported features of the disorder to publication.  She even shares new unpublished work, and talks about her findings as potential biomarkers to use in clinical trials.

Take a look and see why we love and appreciate Dr. Smith-Hicks.  We are lucky that she has been actively studying Syngap1 Syndrome patients for years already.

Elise Brimble is one of the few people who could successfully fill the role of guiding the creation of a platform for a digital Natural History Study.  She draws on her career as a genetic counselor to help build a tool that is an essential prerequisite for clinical trials of any treatments, including those currently under development.  Ciitizen is a company leveraging HIPPA law and medical records to create a digital Natural History Study, complete with normalized data analysis, and machine learning.
After introducing the company, Ms. Brimble gives an overview of the pipeline of information used by the platform, shows the scope of the joint project between Ciitzen and SRF, and leaves us with a snapshot of sample data extraction.

If you have an interest in how machines talk to each other, you will be interested to hear about the international codes used to describe clinical phenotypes, medicines, and measurements.  Ciitizen is finding holes in the ability to describe features of our patient population, and working to get new codes adopted to fill that need.  With over 75 patients enrolled to date, we are looking forward to data from the first 100 to be analyzed, and we are excited for the platform and the web-based portal to be ready to show us analysis of our neurodevelopmental disease.

If you are a parent who has not signed up, please do at Ciitizen.com/SYNGAP1, SRF covers all costs.  #SRFdoCiitizen

Dr. Schlecht is a director of SRF, a SYNGAP1 parent, and a hard-working saint, who has almost single-handedly pushed for medical codes for ICD-10 and ICD-11, in order for our patients to have a meaningful and standardized diagnosis.  Currently our population has a range of diagnoses with a range of effects on insurance, medications, and understanding of the disease.

Dr. Schlecht also spoke to the projects coming up in 2021 for SRF: the funding of post-docs in the labs of Drs Heller and Coba, a collaboration with the Developmental Synaptopathies Consortium of the Rare Disease Clinical Research Network, the pursuit of an NCATS Conference grant, encouraging biomarker research, and recent efforts to facilitate a mouse model with a humanized Syngap1 gene (replacing the mouse gene). Each of these topics has a potential role to play in the drug development efforts for Syngapians.

By the end of the four hours we were exhausted in a good way, the way that has you thinking hard about the science, and wishing hard for treatments to help our kids and our families.

Mike wrapped up, thanking everyone & made three announcements:

Finally, Mike thanked Invitae for their support of this event.  Their investment defrayed the cost of inviting over 3,000 neurologists and other members of AES to attend the session via US Mail.  We are grateful for their support.