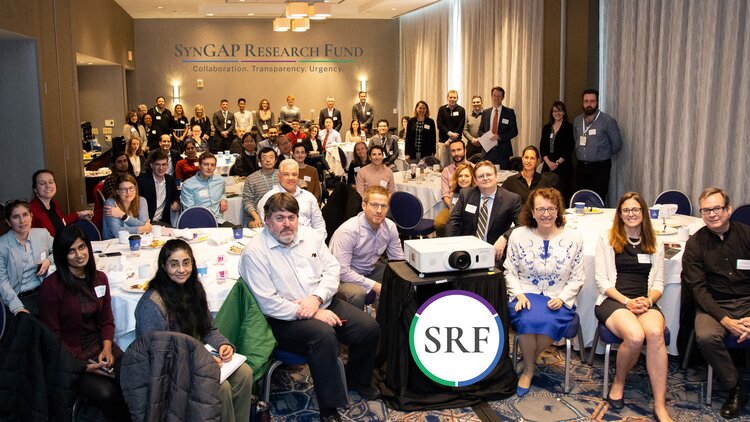 Last year, when we had just founded SRF, I attended the 2018 annual meeting of American Epilepsy Society, AES. It is “the meeting” for neurologists in the US. Some rare disease groups host meals, where research updates are shared, on the sidelines of this massive meeting. They do this to take advantage of the fact that the everyone is already there, all the people they want to speak and all other investigators they want to learn about their disease. It is brilliant.

Last year, two of the most impressive disease organizations — DSF & LGS — graciously allowed me to sit in on their roundtable and see how it was done. At DSF, there were ~150 people reminiscing about how 9 years before it was just 30 of them sitting around a table and now look at how far they had come…

SynGAP needs to go that far, actually faster, I thought to myself. That night I swore to myself that the first Annual SynGAP roundtable would happen at the next AES. Today that happened, and it was worth it.

Aaron personally emailed most of the researchers who have ever published on SynGAP and invited them. Virginie has agonized over breakfast menus. Like everything else with SRF, it would not have been as good without these two. We asked our SAB to join — Vice Chancellor Lowenstein served as our MC, Professor Mefford attended and invited a number of epilepsy leaders, also both Professors Scheffer & Huganir presented. 60+ people RSVP’ed and I told people that if 20 people showed up I would be thrilled. We had over 60 attendees, it was standing room only…researchers, biotechs, doctors and families. I am so proud that we had also a dozen SynGAP parents in the room as well: I firmly believe that we need to have researchers & parents in the same room as often as possible. We’ve had non-stop feedback all day that this was a success.

The presentations, briefly summarized below, were remarkable. We definitely earned more mindshare in every scientist who attended — which is a major victory by itself.

SynGAP1 regulates synaptic transmission and plasticity and neuronal development in the brain. Recently genetic studies have found that de novo loss of function mutations in SynGAP1 cause neuro-developmental disorders including intellectual disability, autistic behavior and epilepsy. Dr. Huganir will present recent advances on the biology of SynGAP1 in brain function and potential therapeutic approaches for treatment of SynGAP1 related disorders.

Human neurons derived from patient induced pluripotent stem cells (iPSCs) provide a unique opportunity to discover the underlying pathophysiology of neuro-genetic disorders. We have created induced neurons from patients with pathogenic SYNGAP1 variants and are currently investigating their molecular and electrophysiology abnormalities. These induced neurons will serve as an experimental platform for discovery of targeted therapies for SYNGAP1-related intellectual disability.

A key part of the SYNGAP1 phenotypic spectrum is epilepsy. Dr. Scheffer will discuss published findings from a large patient cohort (n=57) for SYNGAP1 mutations which cause a generalized DEE with a distinctive syndrome combining epilepsy with eyelid myoclonia with absences and myoclonic-atonic seizures, as well as a predilection to seizures triggered by eating.

SynGAP1 RNA is differentially spliced to produce several different isoforms that may have distinct functions in neurons. Dr. Araki will present new data on the RNA splicing of SynGAP1 and the functional roles of different splice forms. These data are relevant for developing potential approaches for genetic rescue experiments for the treatment of SynGAP1 associated disorders.

Modulating expression of SYNGAP1 could hold therapeutic benefit. RNA targeting therapeutics such as antisense oligonucleotides can be deployed in multiple ways to achieve this therapeutic goal. In today’s talk, Dr. Petrou will briefly overview these approaches and discuss how they may be relevant to therapy in SYNGAP1 patients.

SAVE THE DATE! THE 2ND ANNUAL SRF SYNGAP ROUNDTABLE WILL BE DECEMBER 4TH, 2020 AT 8 AM PACIFIC TIME. MEETING LINK TO COME!