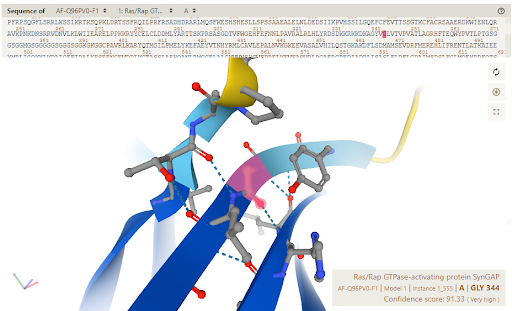 Aaron Harding is a scientist and director at Sharp HealthCare, member of SRF’s Board of Directors, and a SYNGAP1 dad. This article is based on information gathered through shared personal experiences in the SYNGAP1 community. Scientific information is alluded to via hyperlinks to other articles, but their accuracy is not guaranteed.

‍The Syngap community of patients have many different specific de novo (new) mutations. Unlike diseases with familial inheritance, where recurring variants pop up again and again, SYNGAP1 mutations are spread thin across the long protein. When we look at the first 81 SYNGAP1 mutations in the Ciitizen Digital Natural History, about two thirds are protein truncating variants, meaning that the mutant version of the protein stops before making a full length protein. It is clear what has gone wrong with protein truncating variants from simply looking at the DNA sequence, and they are typically classified pathogenic.

Another 20% of the SYNGAP1 mutations are single nucleotide changes that create amino acid substitutions, called missense mutations. It is not immediately clear what the effect of an amino acid substitution will be: It may result in a loss of function or a gain of function in the protein. Because of this uncertainty, many single nucleotide changes in SYNGAP1 have been classified as variants of uncertain significance (VUS) -- SRF has an entire article dedicated to these. The Syngap Research Fund (SRF) is committed to understanding which VUSs are pathogenic, and what effect missense variants have on the function of the SynGAP protein.

In collaboration with the Syngap Global Network, SRF connects with SYNGAP1 patients worldwide. As part of that, SRF set up a Facebook SRF & SGN | SynGAP Missense Variant Subgroup. Recently, family participation in the group led to the surprising finding that nine unrelated individuals share the same missense variant.

We have identified an apparent hot spot for a de novo missense mutation. We want to share this information with the patient community and researchers to promote and facilitate a heightened focus on this potentially important area, SYNGAP1 missense mutation c.1030G>A, p.Gly344Ser.

Surveying the genetic variants that families share with SRF allowed us to identify this unique and significant pattern in our patient list. Without our constant engagement of families, it would take much longer for formal research efforts to identify such a pattern.

The Communication Trail: Connection is everything!

How did we find this group of patients? First, a parent from Portugal reached out to let me know our children had the same missense mutation. When additional missense SYNGAP1 families joined the group, she identified others with the same variant. Shortly thereafter, SRF’s Russian liaison shared the name of another SYNGAP1 patient with the identical variant. Finding and recognizing these “needles in a haystack” emphasizes an SRF saying: Connection is Everything!

To date, nine families globally have been identified with this same mutation. The families reside in Canada (1), Czech Republic (1), France (1), Germany (2), Portugal (1), Russia (1) and the United States (2). The documentation is as follows: six have shown genetic reports that confirm the mutation; our colleague in Germany vouches for one (they confirm all members with a review of genetic reports); one is published in ClinVar for France, and one is listed in an Epilepsy Research publication from 2018. (Download the full article and scroll to the end of the Results section, pg 59.)

Nine people out of 985 know patients worldwide–per the 31 December 2021 #SYNGAPcensus–that’s close to one percent!  In addition, another family has a single nucleotide change one position over in the DNA, creating a different substitution at the same amino acid: c.1031G>T, p.Gly344Val.  All ten (nine Gly344Ser plus one Gly344Val) of these mutations have been classified as pathogenic or likely pathogenic.

p.Gly344 lies in exon 8 in the C2 domain, Figure1. The C2 domain, located immediately upstream of the GAP domain within SynGAP, is required for Rap GAP activity (Pena et al., 2008).

‍How is this possible?

How do ten people in the world have the same rare de novo mutation in the same location, and what does that mean for research? Of the first 81 SYNGAP1 mutations in Ciitizen, most have only one example, although there are a few mutations with two to four examples currently identified. Whether you are in the Ciitizen Digital Natural History, or especially if you are not, connecting with SRF to add your variant to our list builds an accurate description of our patient community.

The science of these mutations

p.Gly344 means that a Glycine amino acid is at position 344 in the Syngap protein. Glycine happens to be the smallest amino acid. Its side chain is a single hydrogen atom. The  hydrogen in Gly344 is predicted to be used in hydrogen bonding within the protein structure (Figure 2b). Any substitution at p.Gly344 could destabilize the protein since any substitution will be larger than a hydrogen, and would interfere with the modeled hydrogen bond. Does the substitution of Serine (or Valine) destabilize the protein? Is the protein so unstable that the mutant protein is degraded or does it persist in the cell? Is the mutant Serine phosphorylated? A site that can be phosphorylated is a molecular switch, where adding or subtracting a phosphoryl group to the amino acid alters the activity of the protein. (See Wikipedia for more.) Syngap is regulated in this way, and adding another Serine may impact its regulation by phosphorylation. We don’t need guesses, we need real answers.

In fact, each and every Syngap variant that changes an amino acid should be analyzed for whether or not it is likely pathogenic. This is an area that would benefit from more direct research and tools to test the effects of any substitutions.

‍To determine the biological and biochemical consequence of this mutation, research is needed. The ten patient cases with the p.Gly344 missense variant provide a unique opportunity to:

Currently, there is an iPSC cell line for c.1030G>A, p.Gly344Ser that was created by Simons Searchlight as a part of their generous research program. That’s a major and essential step toward getting the ball rolling on analysis. The next step is to raise funding to create an isogenic “corrected” cell line to use as a comparison. Then, partnering with scientists to create mouse and/or rat models to study this specific missense mutation would follow.

Other more general proposals include using the missense variants to:

By connecting families, SRF has uncovered an important research opportunity.

Now to make it happen!

Learn more about missense mutations in Episode 44 of Syngap10, SRF’s weekly briefing on everything you need to know about SYNGAP1.