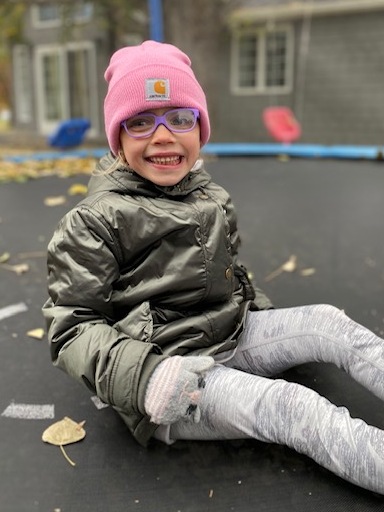 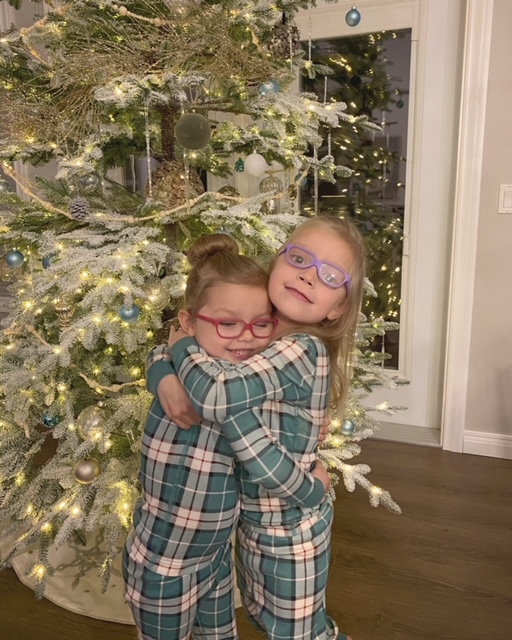 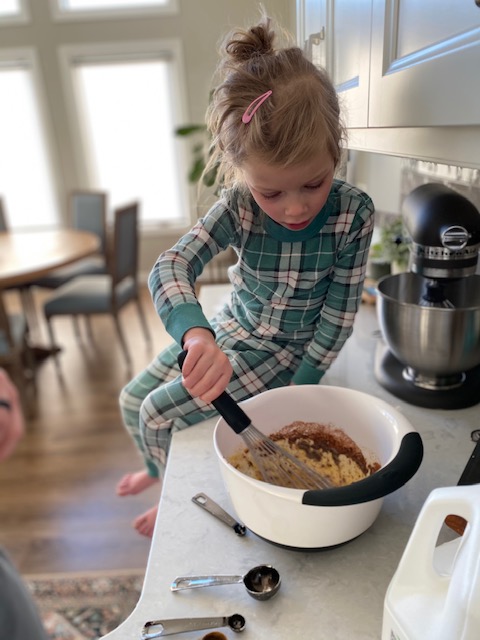 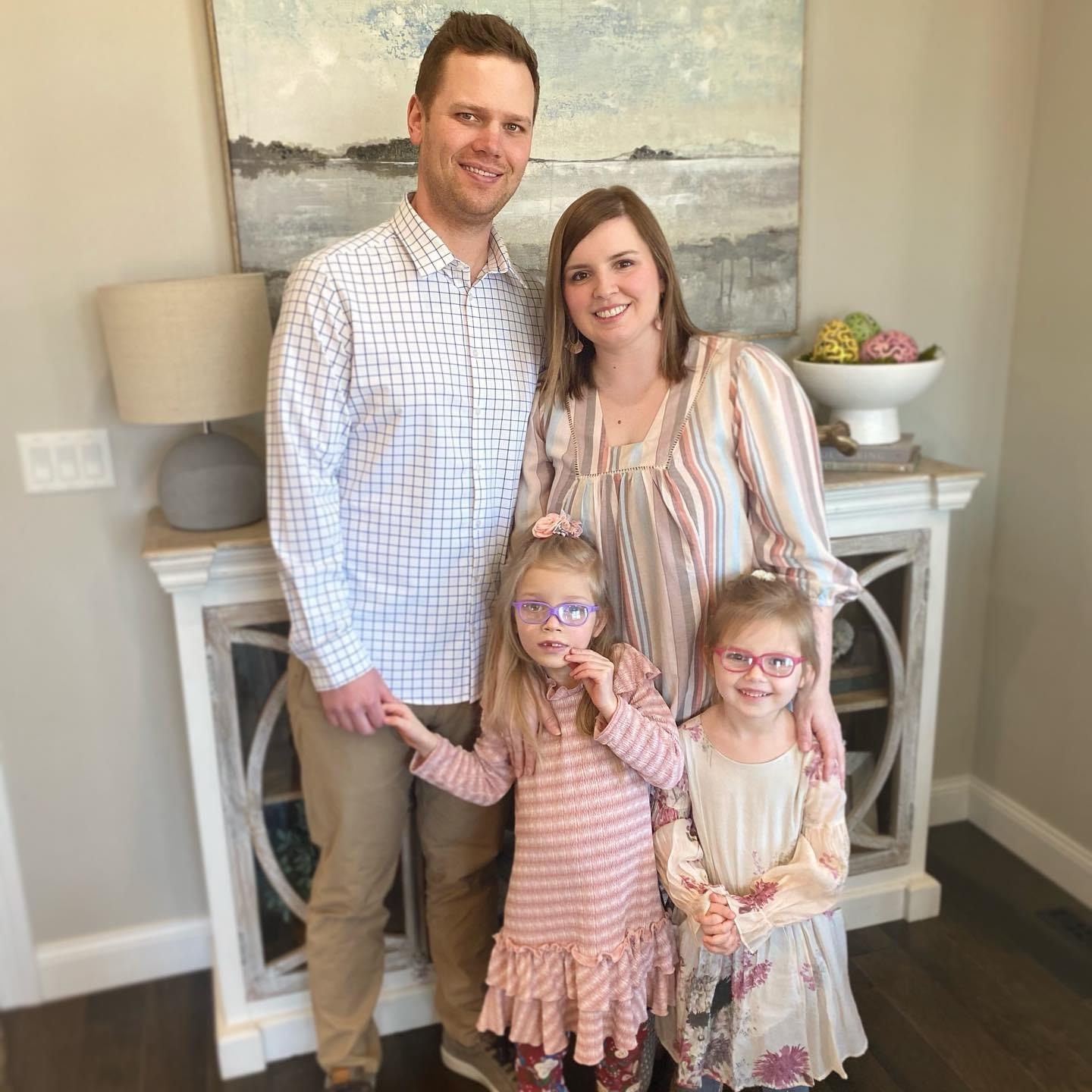 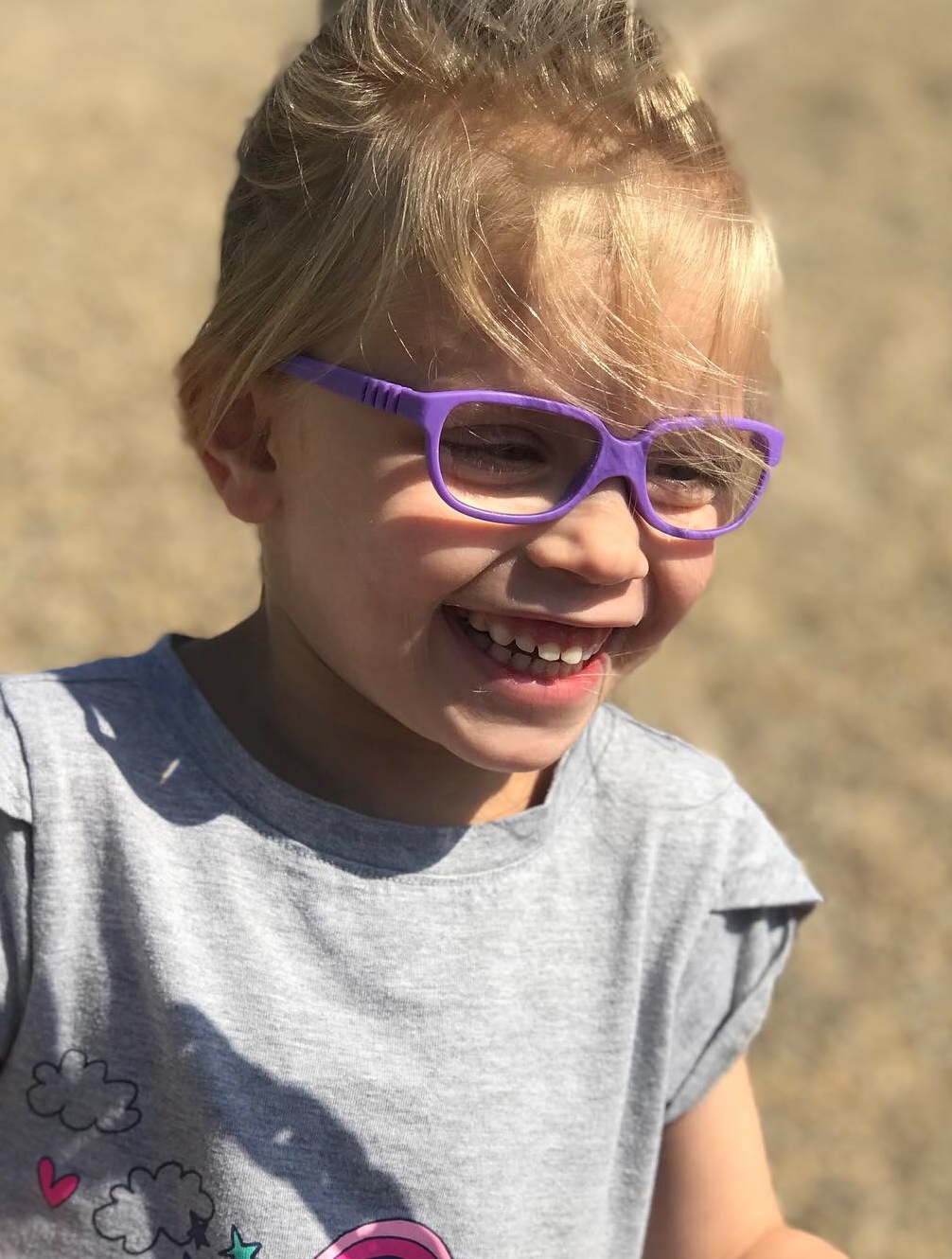 Looking back, one of the first things we noticed about Fallyn was that she didn’t like to put weight on her legs as a baby.  She was late to sit up, late to crawl, and gagged when we started introducing baby food at 6 months.  As a baby, she rolled around the room to get to something she wanted. When she hadn’t started crawling by 12 months we got her enrolled in some therapy.  It was also around 10-12 months we noticed she started to wave her hands in front of her face and she started to have an eye turn. Fallyn took her first steps around 18 months old.  Because of her low tone she wasn’t the most steady and it took quit a while for her balance to improve and for her to gain independence.  Around 19 months she got her first pair of glasses and around  27 months she had bilateral strabismus surgery.

Once we  introduced thicker puréed foods and worked with speech therapy we saw improvements in her swallowing.  We do notice she still tends to overfill her mouth and doesn’t always chew her food long enough so we are careful to make sure she has foods cut up small enough.  After we took away her baby bottle with milk in it she started to only want to drink water.  She refuses any milk, juice, or flavored drinks unless it is a smoothie.    Fallyn has dealt with constipation and gas issues from the moment I quit breastfeeding (3 months old).  We did several doctor visits and tested for different allergies/intolerances but could never come up with any answers until we got her syngap diagnosis.

As a baby Fallyn actually slept fairly well. It was around 2.5 years when we started to have difficulty with her waking around 2-3am completely distraught and staying up for the rest of the night.  After doing a sleep study we did find moderate sleep apnea.  She had her tonsils and adenoids removed around 5 years.  During the same surgery they corrected a lip and  posterior tongue tie. We didn’t realize she had the ties until it was pointed out by one of her speech therapist.  After her surgery we did feel we saw a large improvement in her sleep as well as her eating.  On occasion she still wakes in the the night but it seems to be worse if she is sick.

Fallyn started to have staring spells around 2yrs and had a 2 hour eeg and mri at that time, which were considered normal.   Fallyn saw a geneticist around 3 years who did a chromosome micro array, which did not give us any answers.  After pushing a little bit harder for answers and getting a referral to a geneticist in Minneapolis, we were finally given the answer we thought we would never find.  Fallyn's diagnosis came in December 2019, after getting results from whole exome sequencing.  We have since had a 5 hr eeg which did not show any seizures at the time.  She does not have any epilepsy diagnosis or autism diagnosis at this time.  We have not noticed any obvious seizures but we have seen some episodes of staring, eye movements, behaviors when eating,  that have made us question a second opinion or longer EEG.

Fallyn's first few words started around 2 -3 years old.  She usually only says one word at a time and her receptive ability is much greater than her verbal ability.  She has an easier time copying words then coming up with the speech herself. Fallyns knows her ABCs , colors, and some numbers. Fallyn struggles with understanding abstract concepts. Fallyn goes to kindergarten at a local public school and has an EIP with speech, OT, pt, and special Ed services.  We are currently looking into possibility of ABA services or therapies to help with behaviors as we have seen an increase in behaviors this past year (hair pulling, biting self, throwing).  Most of Fallyns behaviors are self injurious but on occasion she lashes out at family or people with whom she is comfortable. Fallyn has always had different sensory issues- auditory, tactile, oral.

She absolutely loves water, music, babies, outdoors, animals, the trampoline,  baking, and YouTube.  She has the biggest smile and her laugh is infectious.  Fallyn thrives best on praise and positive reinforcement.  Fallyn has one sibling, Mylah, who is two years younger.  Although some days can be trying, they have quite a special bond and really do love each other.  Fallyn can be very silly at times and she can also be very loving!  At times she can be shy.  She likes to watch people. When she does talk, she wants you to repeat and acknowledge what she said!

We are so greatful to have found the syngap community. We hope that with targeted therapies and a greater understanding of her struggles we can give her her best quality of life.  It is so helpful to read what has and has not worked for different families and how to prepare for the future.  We are hopeful for the future and the medical advances that we may see in Fallyn's lifetime! 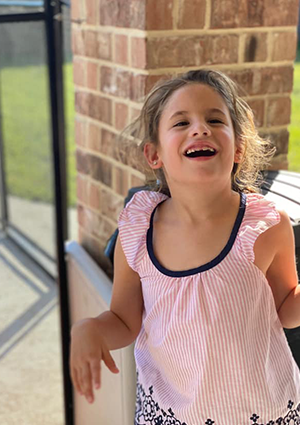 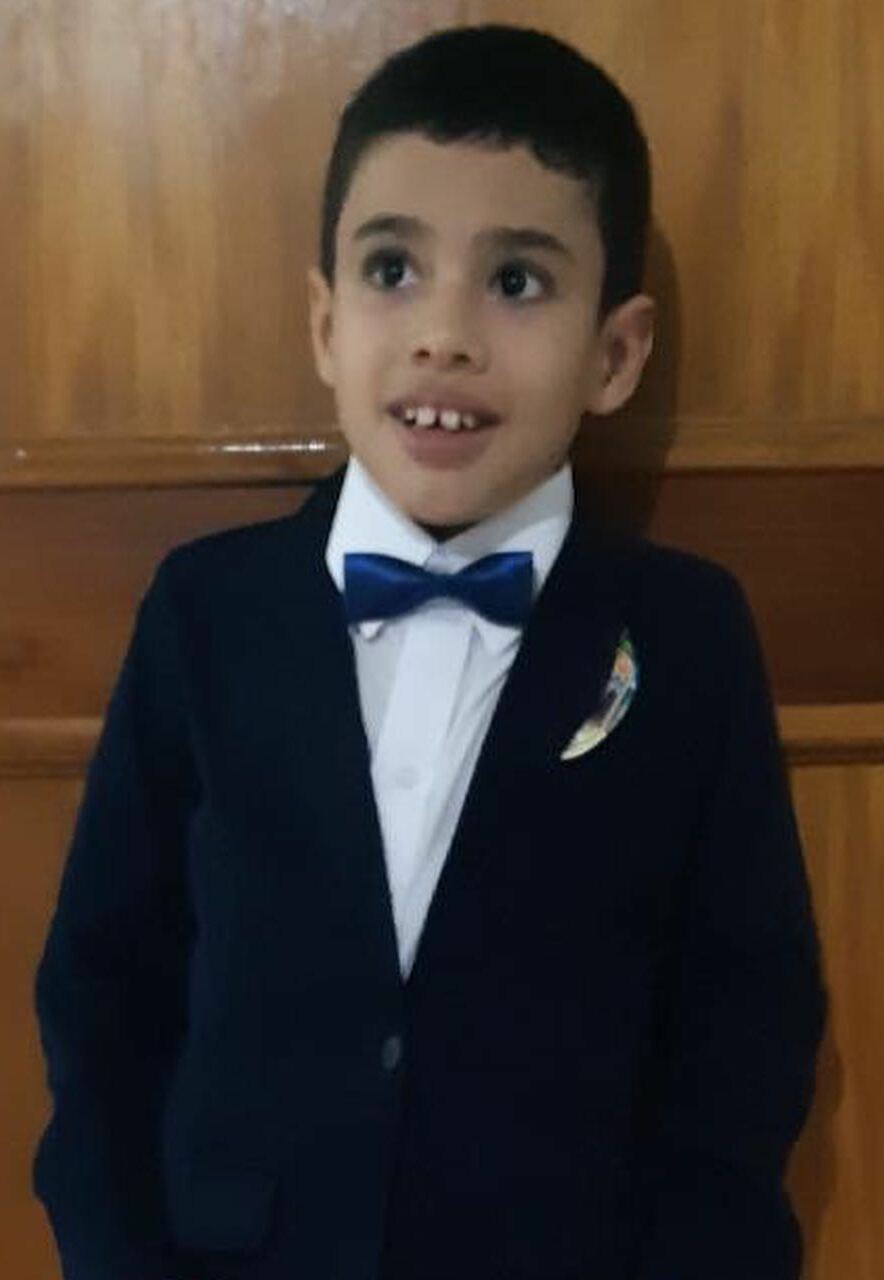 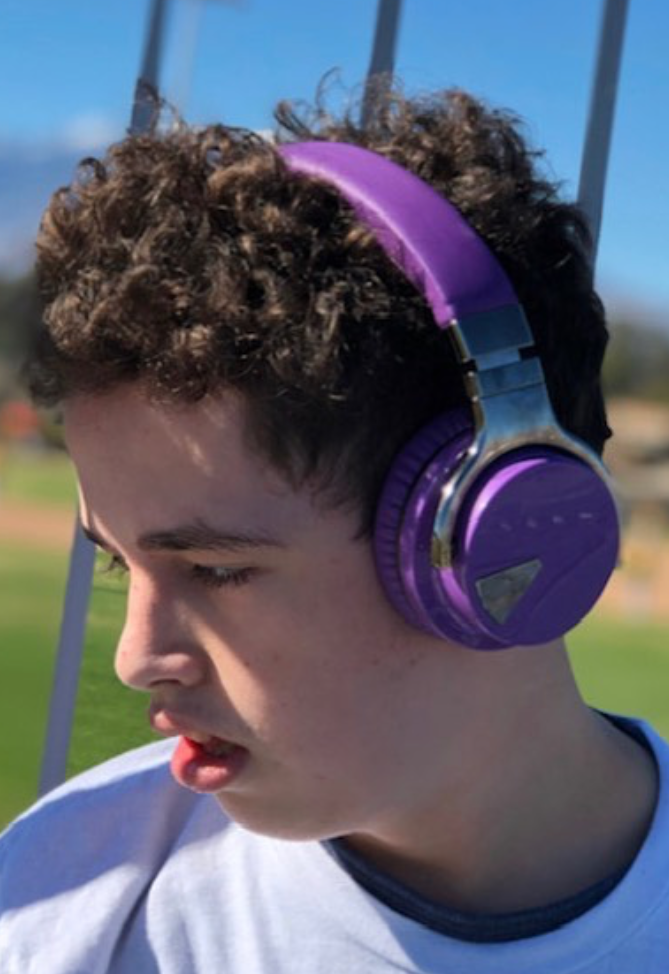