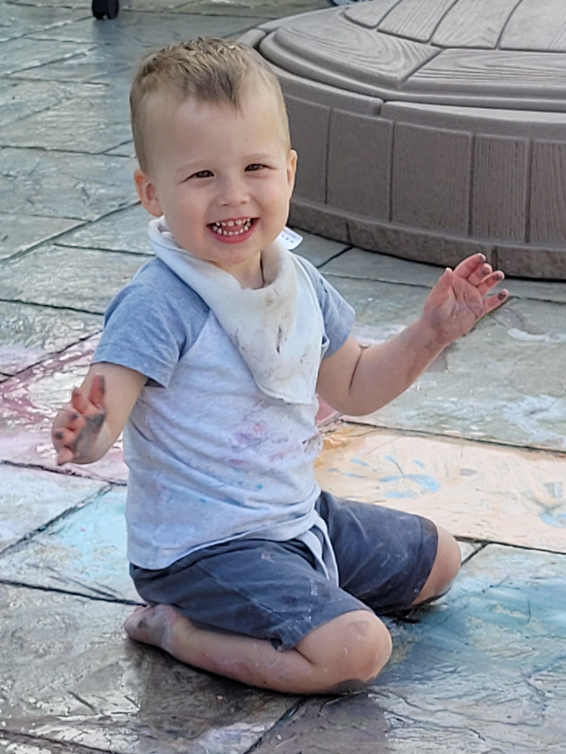 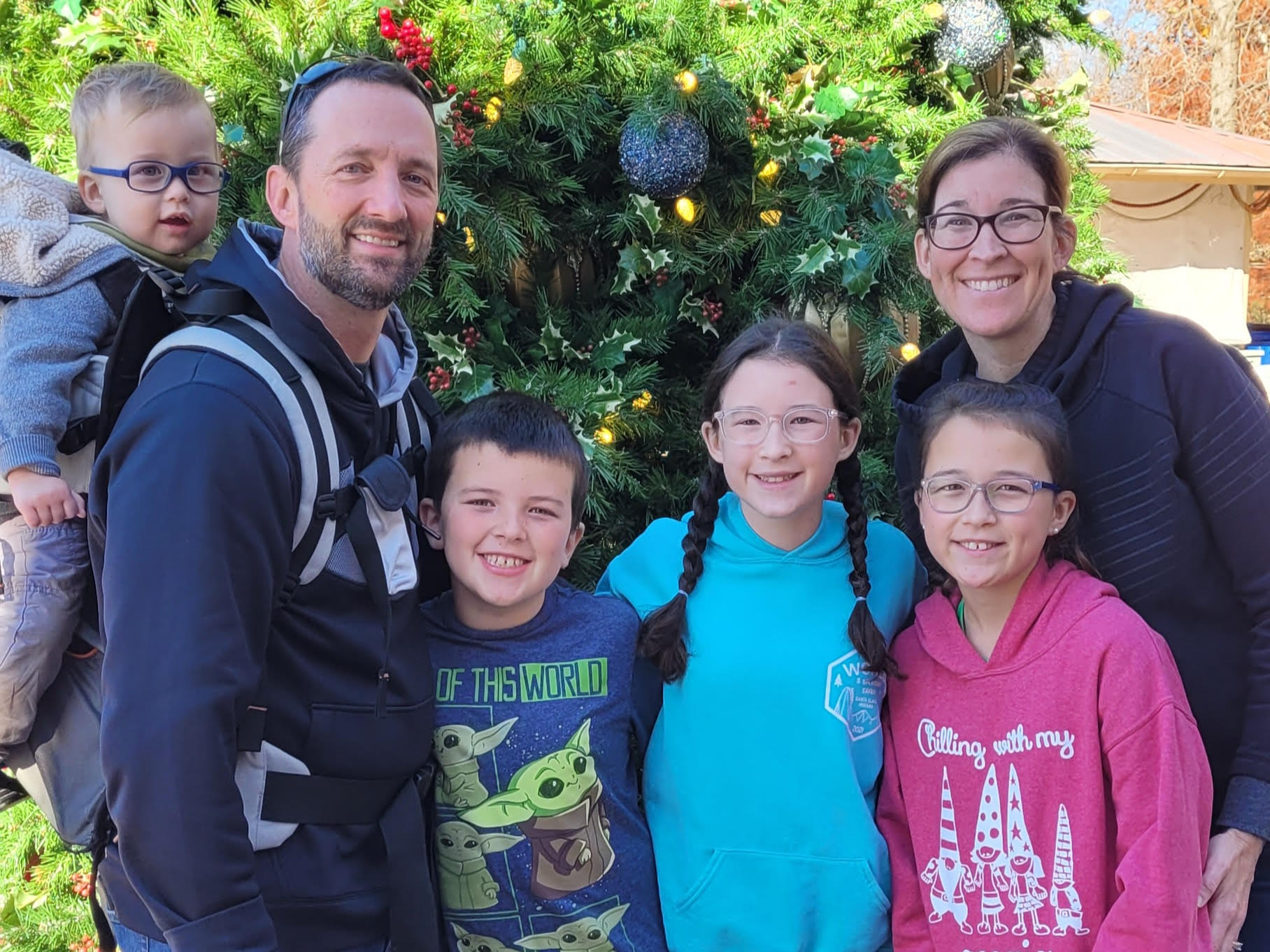 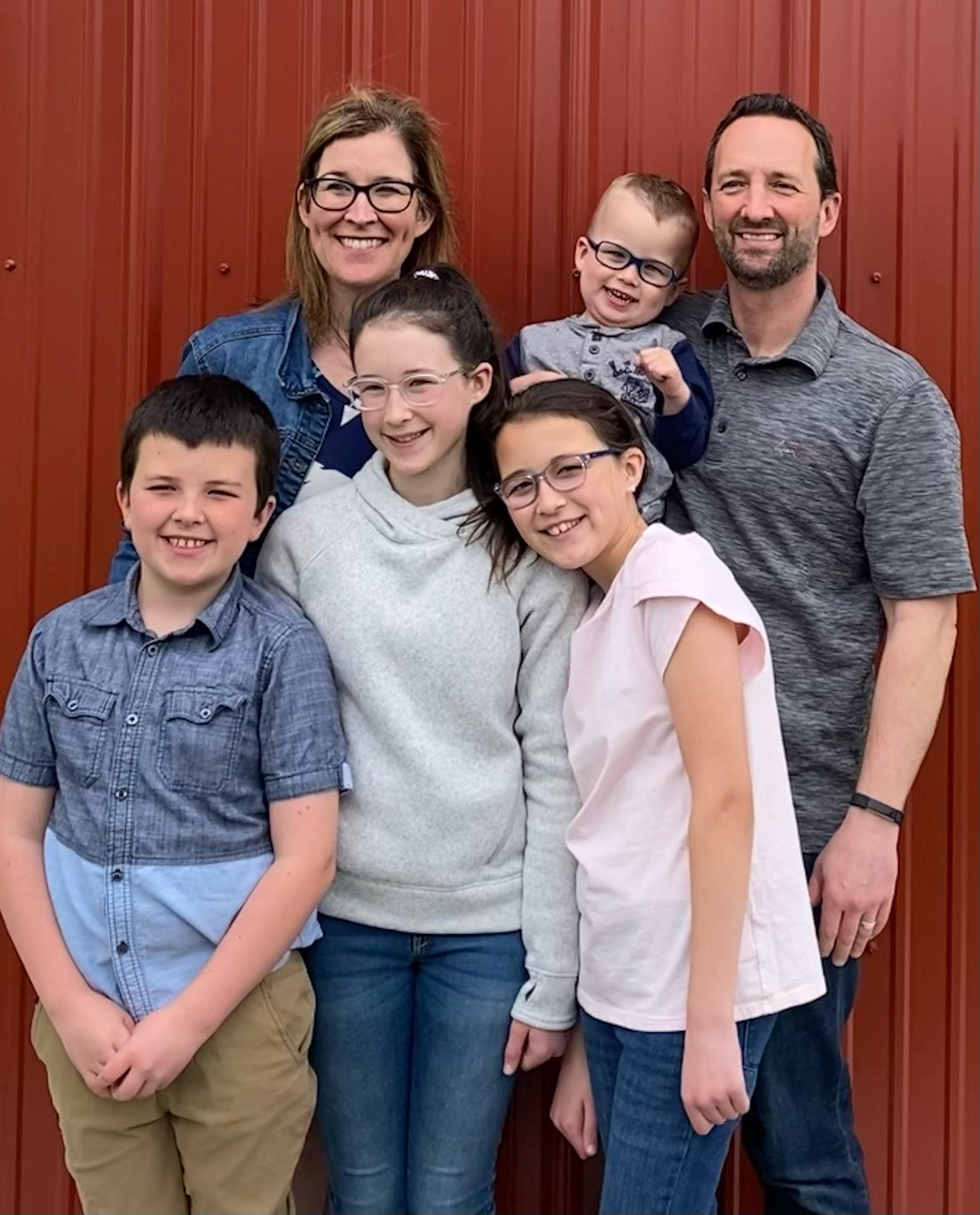 Jonathan was born in December 2019 via a normal and healthy pregnancy. I stayed home with him for a month before returning to teach Preschool 3 days a week in February 2020. In March 2020, Covid changed the world. While it was a depressing time for many, in our case, it was a blessing in disguise because it meant that I was able to teach from home and our older kids were able to do school from home. That meant lots of extra family time together and way more bonding time with Jonathan.

Jonathan was a happy baby. He ate well, slept well and was easy to make smile. Jonathan developed normally until around 9 months old and then we began to notice that he wasn’t reaching the normal milestones anymore. We originally thought his delay was due to the fact that he had 3 older siblings (12, 11, and 9) getting and doing things for him. On top of that, he has always been a pretty laid-back kid so if toys were too far for him to reach, he wouldn’t try and roll over or crawl to get them.  We honestly didn’t think much of it and figured he would eventually catch up. When I went in for his 12-month appointment, I could no longer deny that his delay was growing rapidly. We immediately started the steps of being evaluated by Early Intervention to receive therapies. He was evaluated and they found out he had low muscle tone. He got approval for Physical Therapy in February of 2021 and started Speech Therapy via Zoom in October of 2021. Jonathan has also qualified to receive Occupational and Developmental Therapy but due to lack of therapists he has not received either of these services through EI. After starting PT, Jonathan began to make slow but steady progress. Jonathan has always been very cautious about trying new things and will often practice things in private until he can master them on his own.

The Road to a Diagnosis:

During some of his PT sessions his physical therapist noticed him blinking when things became hard for him to do and recommended that we see a neurologist to rule out seizures. I have to admit that it took me way longer than it should have to follow through on her recommendation. Jonathan first saw a neurologist in Jan 2022, and they ordered CK and Microarray blood testing along with an EEG to rule out seizures. Both of the blood tests came back normal. While awaiting those results, we saw another neurologist at Shriners Children’s Hospital in Chicago and he ordered an Invitae CP gene panel with the hopes of ruling out Angelmans. On May 25, 2022 we got a call from Shriners.The CP gene panel test revealed that Jonathan had an official diagnosis of Syngap1. I immediately started researching Syngap and came across the Syngap Research Fund facebook page and saw all of the podcasts and webinars available. It was a huge help because I was able to view the webinar on how Seizures in Syngapians show up on EEGs before his first EEG on  June 2, 2022. After a couple of weeks of not hearing results from the EEG, I emailed the neurologist and let her know about the webinar on EEGs and also informed her that Jonathan’s rapid blinking had gotten more severe and was turning into a noticeable eye roll anytime he was doing something difficult (chewing, standing, walking, etc.). I heard back from her on June 28, 2022 and she confirmed he was having eyelid myoclonia. Jonathan started taking Keppra a couple of days later and so far the results have been good.  If you have been keeping track of dates, you will notice that we have only known about the Syngap diagnosis for just over 2 months and have only been treating seizures for 1 month. To say we are new to this diagnosis is a bit of an understatement.

Life, since finding out about the Syngap1 diagnosis, hasn’t changed much. Jonathan is still the same kid he was before his diagnosis. He is sweet, easy to make laugh and smile, loves people and is incredibly social. He loves water, animals and any toys that light up and make sound. He loves to clap for himself when he accomplishes a new skill and can easily be soothed with music. He still sleeps great and eats well rounded meals. He loves to be outside and spending time with his family. His latest accomplishment is standing up in the middle of the room. He takes slow and steady steps while walking (highest step count in a row is 109). Jonathan communicates through simple sign language and to be honest he has great body language to let us know exactly what he wants.  Jonathan’s biggest struggle speech wise is building up a word bank. He has said multiple words over the past year but he will only use one at a time. One week, it will be “up” and the next week it could be “a da” (all done). Jonathan recently completed a week of Intensive Therapy at Shriners and received 2 hours of PT, 1 hour of OT and 1 hour of ST for 5 days in a row. Jonathan made great strides during that week. In PT, he started walking with greater confidence. OT taught him how to open bottles and start working through puzzles or manipulative toys without getting frustrated. In ST, he started combining some of his signs together and vocalized a couple of different sounds during the same week. I am hopeful that Intensive Therapy was just what he needed to build confidence in himself.

We don’t know what the future holds yet for Jonathan but we know that God has a plan for him. We are so thankful for the doctors that have been part of Jonathan’s diagnosis and for SRF for all of their hard work. (Putting Syngap on different gene panels, webinars, financing research and the incredible amount of information they equip their community with.) We also want to thank other Syngap families for their willingness to share the battles they face so we can be somewhat prepared for whatever the future hold 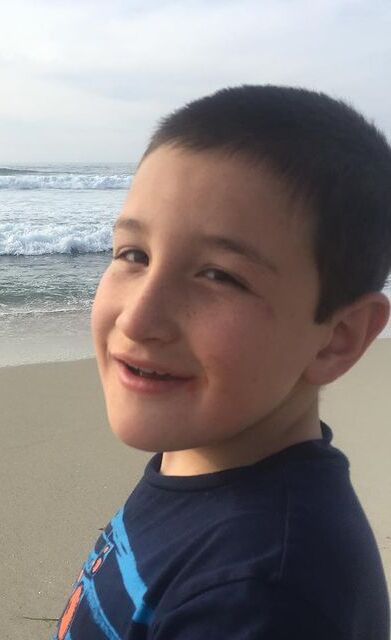 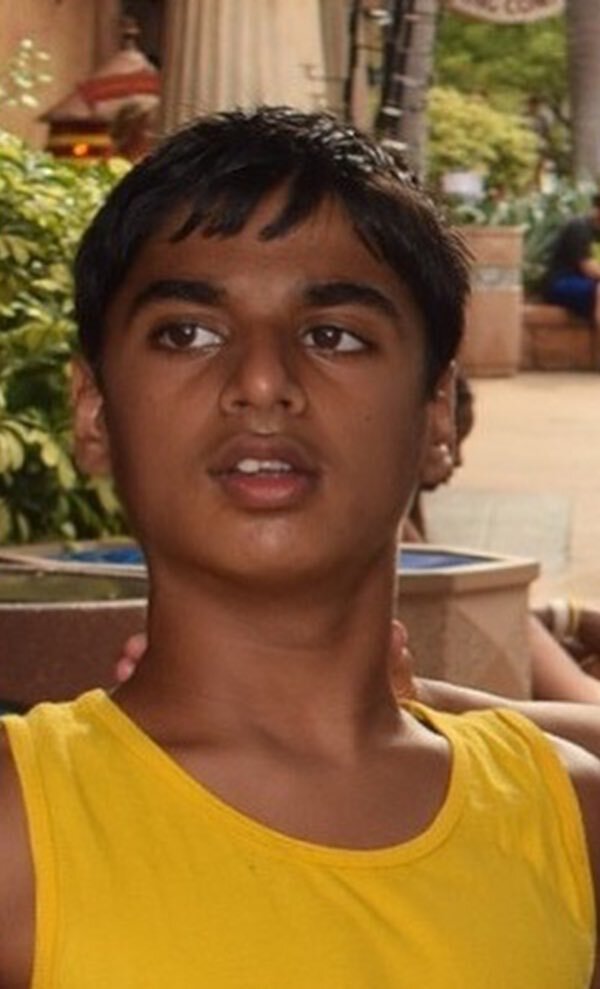 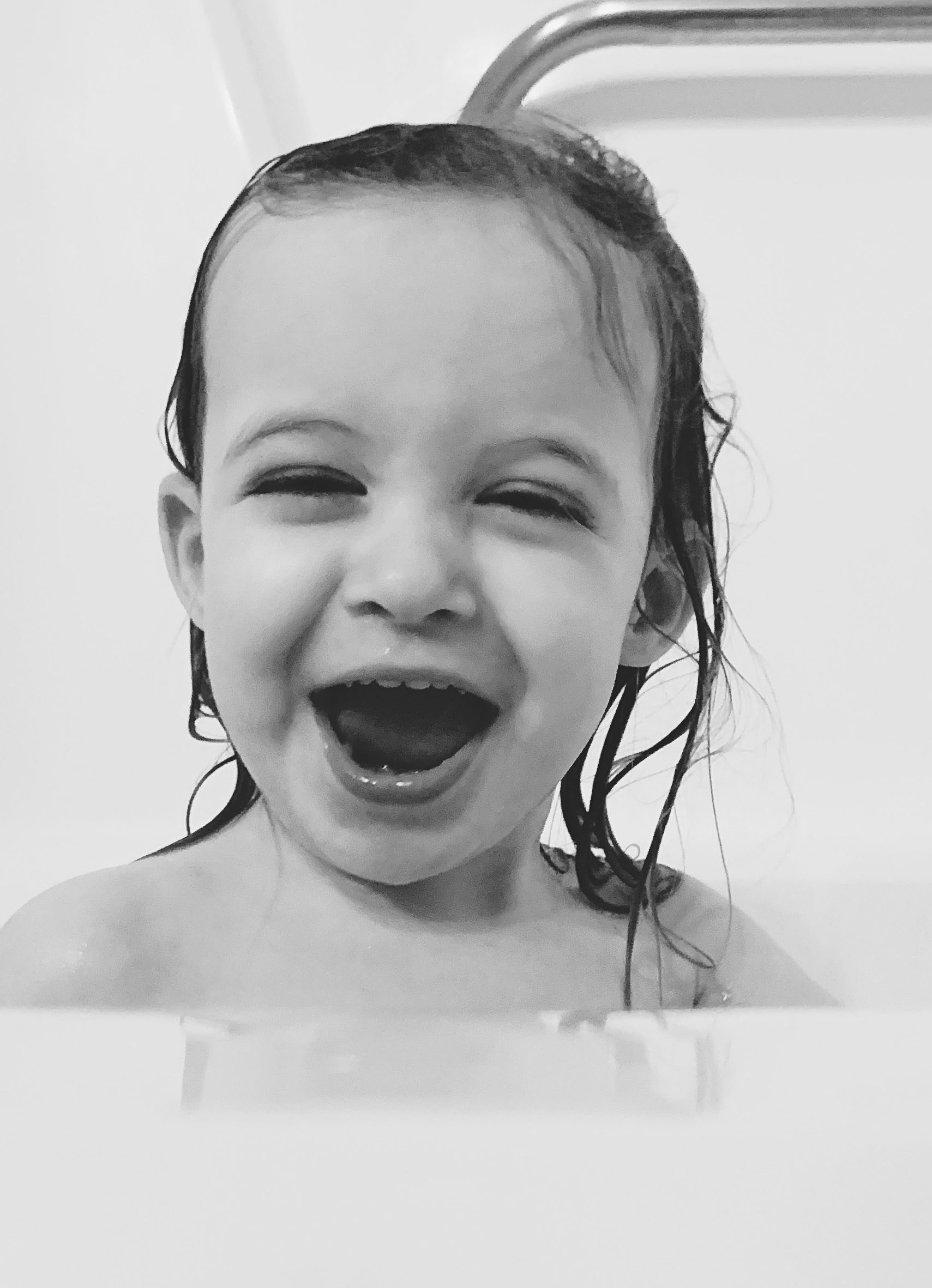